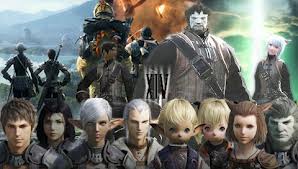 I like to mix it up, level with leves and dungeon runs and fates all mixed together. It’s really enjoyable and honestly never feels like a grind. I have a feeling that is what was intended. The XP for duty finder and leves is actually pretty good and has other rewards like loot and the actual experience of playing.

Once the “hardcore” players max everything out the little people like myself can start enjoying FATE battles that don’t end in 30 seconds.I don’t think they should nerf the XP but they should probably heavily tweak the scaling, especially of some of the non-super-boss FATEs. Those ones seem to fall over in seconds. Instead of increasing the number of mobs even more for normal kill FATEs, they should just greatly scale up their health. Make it so fates take a little bit more time.

Increasing dungeon XP by a reasonable amount (and adding more item/gil drops there) would help a lot too. Plus maybe some Seal bonuses for completing a dungeon. There is already real-time scaling in place, which is really noticable if you’re doing monster-spawn FATEs when nobody else is around. It would just require increased scaling. It feels like there is a cap right now. That said they need to fix the culling problems too at the same time.